Microsoft Pins its Hopes on IE 9

Internet Explorer is under pressure to rebuild Microsoft's browser share, but a Janco report finds it now stable but overall in 'decay'

Reported earlier on the operating system share gains for Microsoft Windows 7 as reported by Janco Associates. But the other half of the Janco report measured Web browser share, which I want to address in this post not just for what it says about Internet Explorer, but how it also handicaps rival browsers.

IE's market share at 66.07 percent in August, down 4.54 percentage points from 70.61 percent in August 2009. That's actually more generous than share numbers from the often-cited Netmarketshare, which put IE's share at 60.74 percent in July, its most recent report. IE recovered in June from a dip below the 60 percent percent mark in April and May, according to Netmartketshare.

But while that uptick might offer Microsoft some temporary relief, Janco's historical view is that "Microsoft's browser market has continued to decay." To be sure, IE has seen better days such in early 2005 when it had 90.61 percent share. Free and open source Mozilla Firefox was just a puppy in 2005 with a 4.44 percent share and Google Chrome was two years away from being launched.

This month, Firefox is at 18.6 percent and Chrome at 6.24 percent but they each have their own sets of issues in Janco's view.

Firefox grew only slightly from 16.23 percent in August 2009 and had been as high as 21.23 percent in January of that year. Janco notes: "The novelty and uniqueness of its features have worn off and have been duplicated by IE … and Google Chrome." The Mozilla Foundation released a beta of Firefox 4.0 in July.

Google Chrome has got the strongest momentum, doubling its market share this year from 3.19 percent last year. But Janco says one factor limiting Chrome is that it doesn't work on all sites. Janco didn't provide further details on that in the limited free version of it's white paper; more information is likely in the paid version. Google released a beta of Chrome 6 Aug. 12.

All of this brings us to IE 9, a beta version of which Microsoft will unveil at an event September 15 in San Francisco. Janco lauded IE 8 as being "feature rich and a step ahead of the other browsers," but withheld judgment on IE 9, which is only available today in preview mode.

The fact of the matter is that the browser market has changed permanently since IE's days of 90 percent plus market share, when Netscape was beaten by Microsoft's competitive practices — practices ruled an illegal monopoly by the United States. Today, Firefox and Chrome are entrenched competitors, despite their own issues, along with Opera, Apple's Safari and others.

Initial reports are positive about IE 9′s potential as a faster browser than IE 8. But it's going to be under a lot of pressure to get Microsoft's browser market share numbers headed in the right direction.

Windows 7 is an initial success

A major finding in the report is that Microsoft’s new Operating System, Windows 7 has 12.05% of the OS market less than 7 months after its release.  That is a major factor in their improved record earnings.  Janulaitis said, “The last time that an OS was accepted as quickly the market was XP.  Vista’s market share has peaked and is in the process of being decommissioned in most enterprise.” 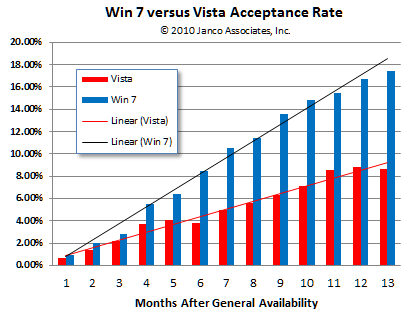