Top Five IT Quotes of the Week

"Google should go big or go home: either launch ad-subsidized unlocked multi-mode products that work across all U.S. carriers, or stop the Nexus line and work with carriers and vendors like a normal mobile OS company."

Current Analysis analyst Avi Greengart criticizing Google's rollout of its Nexus S smartphone that bypasses major carriers and, at least initially, is available only through a handful of retailers. (Enterprise Mobile Today)


"Ruby has become the language of choice, as it enables developers to write code more efficient or effectively than Java. We have seen the Ruby community grow on a fast trajectory and we think it's the future and an unstoppable trend."


"With this anemic increase of jobs there is little to no room for recent computer science graduates and existing unemployed IT professionals to find work. In addition, outsourcing has eliminated many of the entry-level positions that these individuals could take -- painting a very grim picture."

M.V. Janulaitis, CEO of technology consulting firm Janco Associates, giving a grim outlook for IT hiring after a U.S. government Bureau of Labor Statistics report that categorized 2010 as a year of flat hiring rather than growth. (eWeek)


"We were surprised by the CIO interest. We were inundated with calls."

Sundar Pichai, vice president of product management at Google, discussing the new line of Chrome OS notebooks due out next year that will primarily rely on Web services and applications. (Datamation)


"Most enterprises are looking at the 'cloud-o-nomics' of the public cloud because the market price -- for an hour of CPU time and a gigabyte of storage -- is being set. But they're very uncomfortable with the lack of enterprise-class security and potential compliance issues. So they're thinking about how they can adapt that model, so they can run their own private cloud instances."

The job market for IT professionals, though better than the rest of the employment market, still continues to be sluggish.

The Bureau of Labor (BLS) statistics show a drop in the total employment of IT professionals from a year ago.  The areas were there has been the greatest shrinkage are telecommunications and data processing services.  Both of these sectors continue to be adversely impacted by outsourcing. 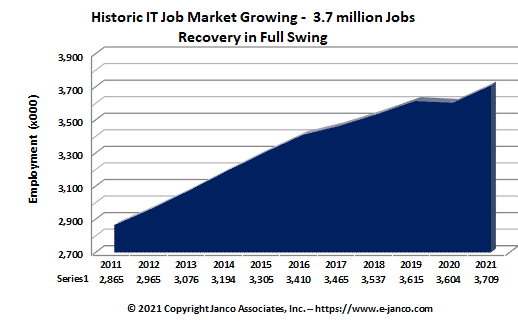