Anemic Job Growth For IT Pros

Janco Associates - The February 2011 U.S. Department of Labor National Employment Report shows sluggish growth in the Information Technology job market.  Janco Associates has analyzed the data and finds a net gain of only 2,600 seasonally adjusted jobs in February for the IT sector. In addition, for the last three months (December 2010 through February 2011) there has only been an increase of 5,300 seasonally adjusted number of jobs. In the last 12 months the total number of jobs has gone from 2,729,300 to 2,736,600 - an increase of 7,300 (7,900 unadjusted) jobs. The unadjusted number of jobs shows a loss of 10,400 jobs.

The CEO of Janco, Victor Janulaitis said, “While the report that was published paints a much more positive picture, the data for the IT sector shows continued stress in Telecommunications with a loss of 43,700 jobs in the past twelve months which is countered with a growth of 48,500 jobs in Computer System Design and Related Services.” He added, “The overall growth of the 7,300 jobs is not enough to cover the recent college graduates and does not bode well for the Class of 2011.”

Corona Virus shutdown has a large impact on number of new job lost in the second quarter of this year. 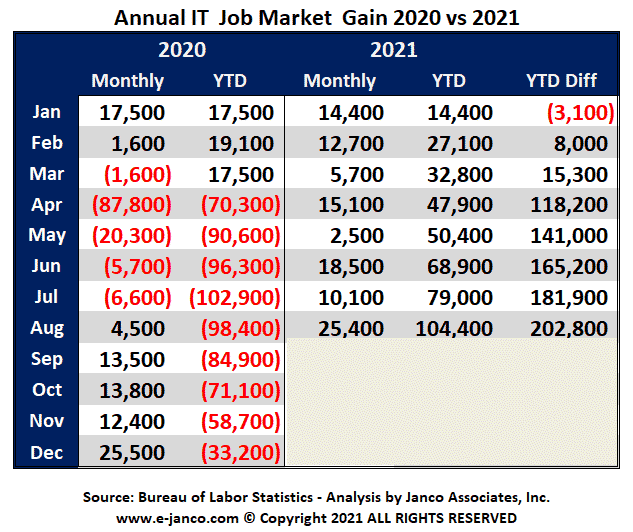