Charts showing key compensation trends are provide in all versions of the study.  A reduced version of one of the charts is shown below.


Cloud a mixed bag for CIOs and IT Professionals

A major research firm recently estimated that the number of cloud-related IT jobs in North America would grow 22% per year from 2012 to 2015, with the total number of positions reaching 2.7 million. The research firm published that finding in a report titled Climate Change: Clouds Impact on IT Organizations and Staffing.

They found that cloud computing could become the key infrastructure model for computing by 2030.  Other findings include

High unemployment states for the most part have improved. In March, the West continued to have the highest regional unemployment rate, 7.2 percent, while the South again had the lowest rate, 6.0 percent. Over the month, only the Midwest had a statistically significant unemployment rate change (-0.1 percentage point). Significant over-the-year rate declines occurred in all four regions: the South (-1.2 percentage points), Northeast (-1.1 points), West (-1.0 point), and Midwest (-0.8 point). H-1B Visas taken up by outsourcers

Offshore outsourcing companies continued to make up the majority of the top H-1B visa users in 2013, according to new government data. These offshore firms have been adding employees by the thousands as their revenues increase. Infosys (India based) led the list in 2013 with 6,298  visas approved, just edging out Tata (India based) which had 6258 visas approved last year.  Cognizant, a New Jersey-based IT services provider with major operations overseas, led the list in 2012 but dropped to 3rd. The company had 5,186 visas in 2013 versus 9,281 visas approved in 2012 versus 5,095 in 2011. 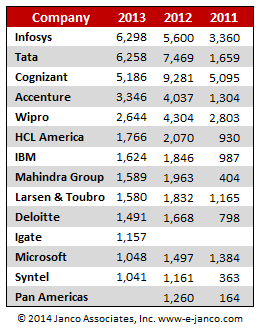 Career planning is critical for IT Pros

Given the nature of technical work and technical people, most generic career advice is close to useless. And too much of it is just plain unrealistic. You don't need yet another list of 24 things you can do to advance your career.

No one has time to focus on that many things, and honestly, most of them make little difference. It's better to select the one essential thing that will make a big difference and focus on that exclusively.

Get a free copy of the IT Salary Survey.  Just got to https://www.e-janco.com/salary.htm.

Current College Grads in IT get lower starting salaries

One more study agrees with the salary data that Janco Associates published in January of this year.